You are here: Home / Home Top List / VOTE Nov. 2022 ~ Shall City of Pacifica Prohibit the Ignition, Use, Discharge, or Sale of all State-approved “Safe and Sane” Fireworks?

Section 2 below. Pursuant to Elections Code Section 9222 and Section 9603, it is the intent of the City Council that the measure be submitted to the voters of Pacifica at the aforementioned Municipal Election. Section 2. The question to be put to the voters of the City shall read as follows, after the heading “Advisory Vote Only” as provided by Elections Code section 9603(b):

PASSED AND ADOPTED at a regular meeting of the City Council of the City of Pacifica, California, held on the 13th day of June 2022, by the following vote:

Celebrating the 4th of July in the City of Pacifica

Pacifica is one of the few cities in the Bay Area to allow legal, “safe & sane” fireworks for the July 4th holiday. “Safe and Sane” (legal) fireworks can be identified by the seal of the California State Fire Marshall imprinted on the product. However, there are limitations in the hours and days fireworks are permitted.

It is unlawful to discharge any “Safe and Sane” fireworks except during these designated hours; from noon to 11:00 pm on June 28th, and between the hours of 9:00 am to 11:00 pm on June 29th through July 5th. Violations of the Pacifica Municipal Code regulating the use of Safe and Sane fireworks will result in fines ranging from $200.00 for a first offense, $400.00 for a second offense, and $1,000.00 for a third offense.

Illegal fireworks are prohibited on all Pacifica beaches according to the California Health and Safety Code. There are NO fireworks of any type allowed on any beaches in the City of Pacifica, except for a defined portion of Pacifica State Beach/Linda Mar. There are also two other sites where legal “safe and sane” fireworks are allowed. Legal fireworks must have the State Fire Marshal seal of approval.

In 2017, the Pacifica City Council adopted the Illegal Fireworks Social Host Ordinance in an attempt to curb the rampant use of illegal fireworks in Pacifica. This ordinance was designed to hold responsible those hosting gatherings for any illegal firework activity on property they own or rent. If officers see illegal fireworks being discharged from a property, the person responsible for the property will be subject to a fine, regardless of who discharged the firework. The penalty for a violation of the Illegal Fireworks Social Host Ordinance is $1,000. 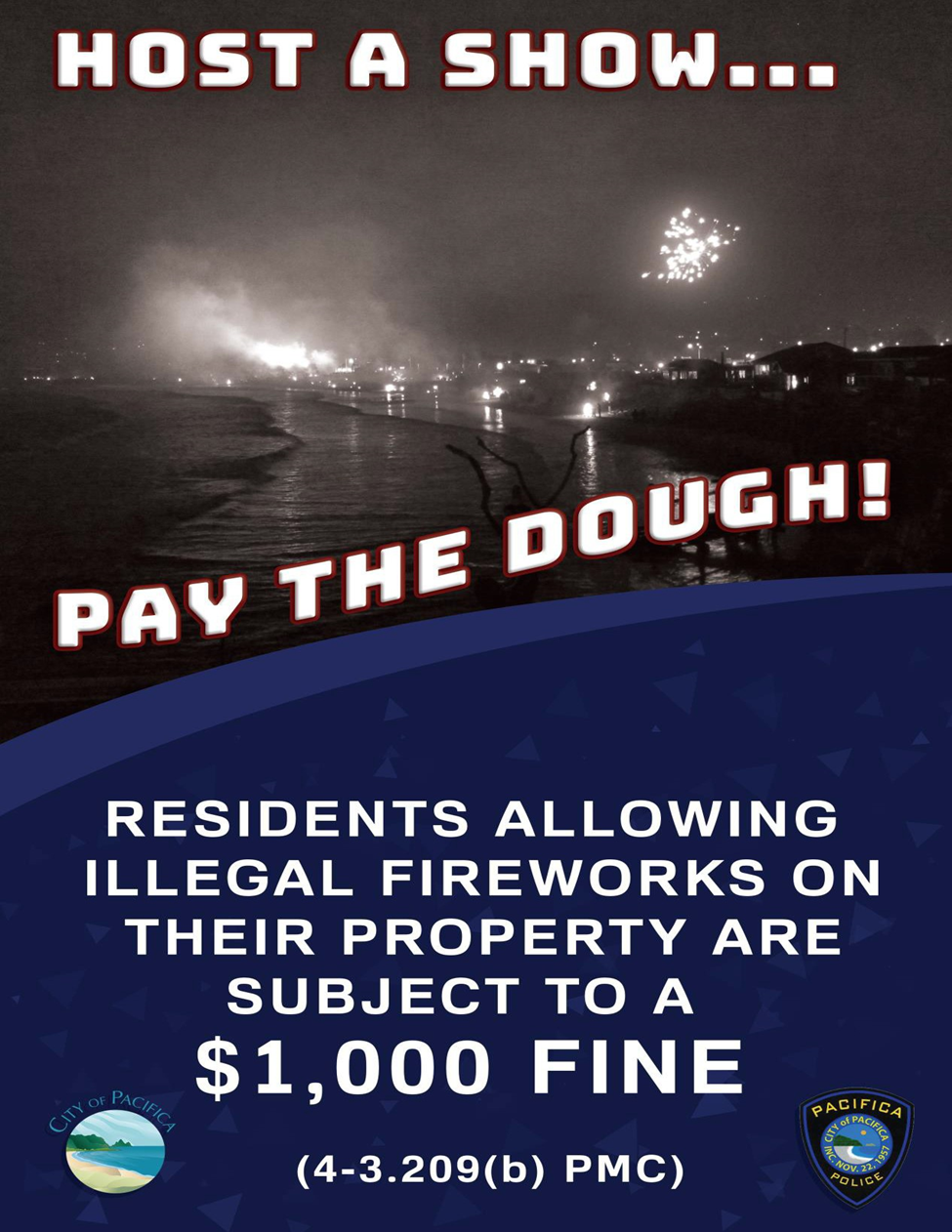 Additionally, if a minor is found discharging illegal fireworks, the person having care, custody, or control of the minor is strictly liable for the illegal activity and subject to a fine.