After receiving resident feedback and concerns, the Beach Neighborhood Parking Pilot Project has been temporarily placed on hold. We are pausing the project to provide all interested community members, particularly the residents on the affected streets, more opportunity to share their opinions about the concept, so that the most viable and effective solution can be determined.
The City’s initial intent with the project was to define the existing parking on these streets into specific parking spaces by painting/striping. By creating more defined parking, we hoped to minimize the existing haphazard visitor parking in those neighborhoods that typically see a large influx of visitors during the peak travel season. The increase in parking demand on these streets has led to significant overcrowding, blocking of driveways, and impeding access for emergency responders.

This project will be discussed during an item regarding beach access as a whole at the City Council’s October 6, 2020 regular meeting.

We are encouraging community members to email comments prior to the meeting to publicworks@hmbcity.com.
We look forward to a productive discussion about parking issues, our proposed pilot program, and community input on how best to proceed with this pilot project.

As you may have seen in past editions of eNews, the City began a pilot parking striping project in the neighborhood near Poplar Beach and Half Moon Bay State Beach to help alleviate beach access impacts. Throughout the year, the City has received complaints from residents near beaches regarding the impacts from visitors over the spring and summer. By defining existing parking into specific parking spaces, the City’s goal is to minimize parking impacts to those neighborhoods that typically see a large influx of visitors during the peak travel season. The increase in parking demand on these streets has led to significant overcrowding, blocking of driveways, and impeding access for emergency responders.
To accommodate the project,, “No Parking” signs will be posted for each affected street 72 hours in advance of the work. The project is expected to take approximately three weeks to complete striping on all streets designated in the pilot project. Depending on the success of the program, it may expand into more areas.
The City has received questions from the public regarding this project. FAQs drafted by the City’s Public Works Department are included below.

What is the project?

The City is delineating and marking parking spaces on certain streets.

This work is being done to ensure that vehicles parking in the public street are not: 1) blocking driveways; 2) fire hydrants; 3) resulting in dangerous line-of-site issues at intersections; or 4) impeding emergency vehicles/response. The markings are consistent with City parking space regulations. This is a pilot program intended to ascertain whether the effort should be expanded, modified, or ceased. The pilot markings are not permanent.

By defining parking, we hope to minimize parking impacts to beach neighborhoods throughout the year. Many residents have reported issues with significant overcrowding, blocking of driveways, and impeding access for emergency responders.

The streets selected were chosen due to their proximity to beach access points (either Kelly Avenue or Poplar Street). These streets were heavily impacted throughout spring and summer and the City’s hope is to reduce those impacts prospectively.
What areas are included in the pilot project?
A map of the pilot project is included below.

When will work be completed?

The contractor commenced work this week. The City anticipates completion of all work within three weeks. Streets within the project will have posted signs with the effective dates and restrictions on parking. The project will maintain daytime parking on one side of each street to reduce inconveniences to residents.
The City and its contractor began the process of painting the parking space limits starting this week on the following streets (see image below): 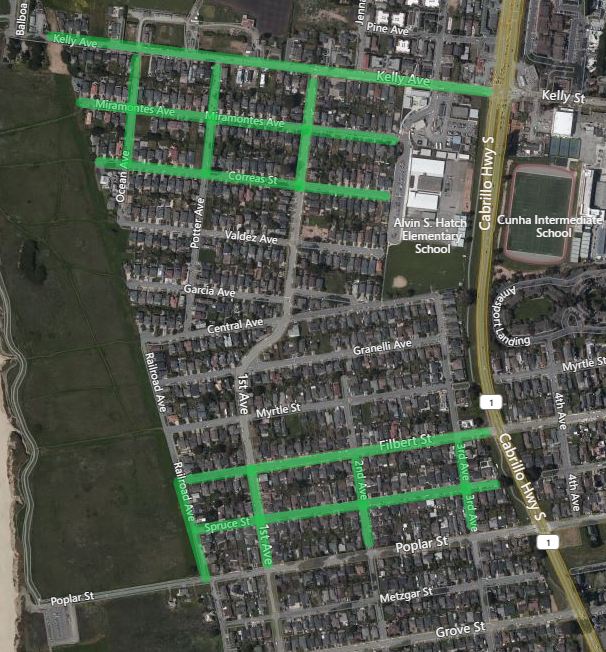 For more information, or if you have any additional questions, please contact the Public Works Department at publicworks@hmbcity.com.