PRESS RELEASE. From the California Department of Fish and Wildlife, Marine Region News Service, Informational Notice as of April 30th, 2021.

The following safety notification is from the California Department of Public Health: 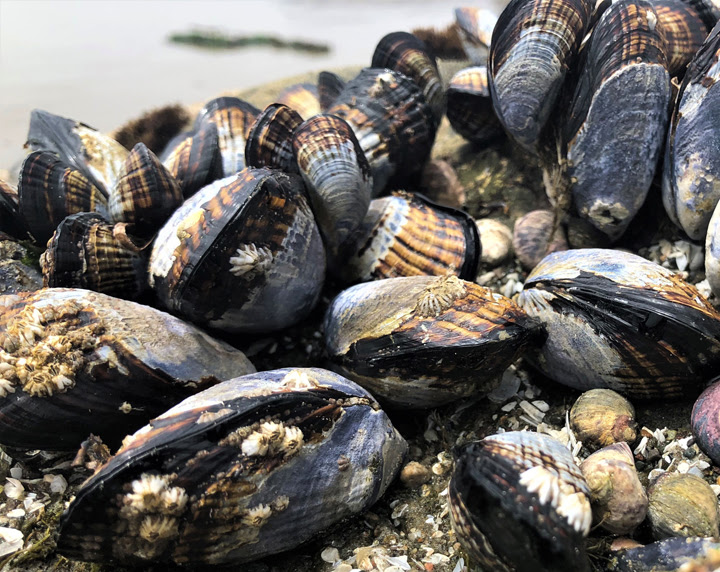 During the quarantine, mussels may only be harvested for use as bait.

The quarantine is in place to protect the public against poisoning that can lead to serious illness, including coma and death.

Both of these syndromes are from naturally occurring toxins produced by certain phytoplankton consumed by shellfish, including mussels and clams. Cooking does not destroy the toxins.
Historically the majority of human cases of PSP illnesses occur between spring and fall. In California, PSP is extremely rare due to the efforts put forth by CDPH to protect the public against poisoning. There have been no reported human cases of domoic acid poisoning in California.
Early symptoms of PSP include tingling of the lips and tongue, which may begin within minutes of eating toxic shellfish. These symptoms are typically followed by a loss of balance, lack of muscular coordination, slurred speech and difficulty swallowing. In severe poisonings, complete muscular paralysis and death from asphyxiation can occur. Symptoms of mild domoic acid poisoning may include vomiting, diarrhea, abdominal cramps, headache and dizziness. In severe cases, the victim may experience trouble breathing, confusion, disorientation, cardiovascular instability, seizures, excessive bronchial secretions, permanent loss of short-term memory, coma or death.
Commercially harvested shellfish are not included in the annual quarantine because all commercial harvesters in California are certified by CDPH and subject to strict testing requirements to ensure that all oysters, clams, and mussels entering the marketplace are safe.
More information about the quarantine, PSP and domoic acid can be found on the CDPH Annual Mussel Quarantine – Frequently Asked Questions (FAQ) web page. For updated information on quarantines and shellfish toxins, call the CDPH Biotoxin Information Line at (800) 553-4133 or view the recreational bivalve shellfish advisory interactive map. For additional information, please visit the CDPH Marine Biotoxin Monitoring web page.

Longtime Coastside resident Michelle Dragony holds a degree in journalism with an emphasis in photography and radio broadcasting. But radio has always had her heart.