You are here: Home / Home Top List / Temporary Safety Fencing to be Installed on Eroding Bluff Near Poplar Beach 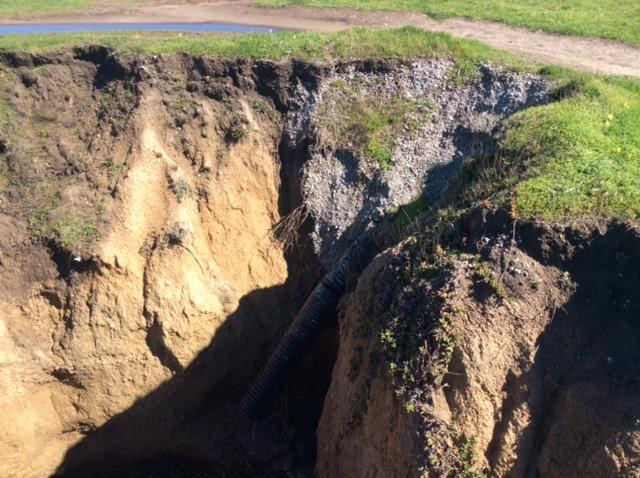 The City of Half Moon Bay will soon be installing temporary safety fencing along the bluff adjacent to the Coastal Trail at several locations near Poplar Beach, due to encroaching erosion which is threatening to undermine parts of the bluff (see photos below).
Due to the significant amount of rainfall we’ve recently received, significant additional erosion along the bluff adjacent to the Coastal Trail has become more evident. After examining the bluff and trail area and assessing the amount of erosion there on Tuesday, the City decided, in an abundance of caution, to install safety fencing to alert trail users and maintain the public’s safety in the area of erosion. Temporary fencing has been ordered, and installation is anticipated to take place within seven-to-ten days.
The City reminds trail users to stay on the paved Coastal Trail, and stay away from the edges of the bluff. 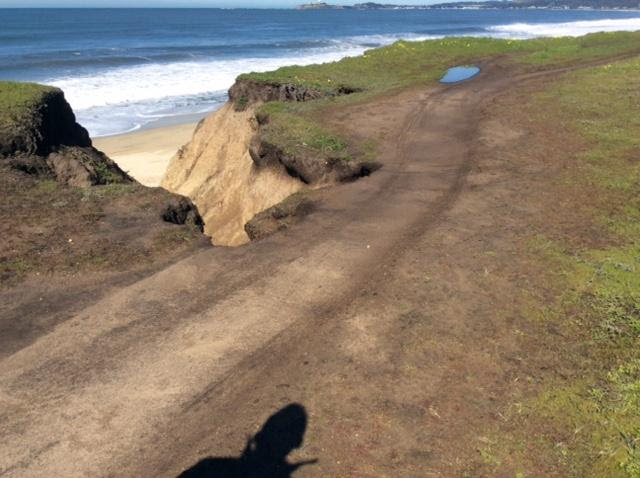 The dirt trail closest to the edge of the bluff – and where significant erosion is occurring –
is not the formal Coastal Trail. In fact, that area is sensitive habitat and is damaged when walked on. Walking on the dirt path also contributes to the erosion.
The City has been monitoring and evaluating erosion on the bluffs throughout this area for some time, and as part of the Poplar Beach Gateways Plan is working on adaptation strategies, toward developing a more permanent solution.
Community members may be interested in reviewing the “Half Moon Bay Coastal Trail Existing Conditions & Trail Planning Recommendations“ document, which is foundational to the Poplar Beach Gateways Plan effort.
In the meantime, the temporary fencing is an important step in assuring public safety while community members utilize the trail in that area. 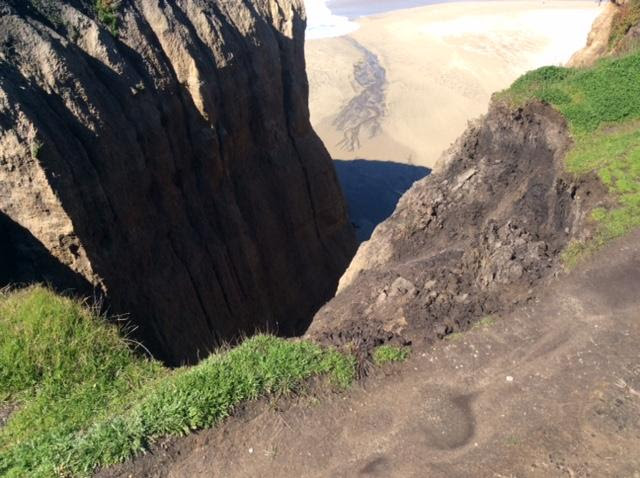 There are approximately 24 localized drainage erosion sites which vary in age, size and complexity (Figure 6). They are associated with small onsite contributing drainage areas and often receive surface runoff from the Trail and adjacent meadow (Photo 6). Several of these sites are significant in size and have the potential to erode quickly during runoff event.

Coastal Butterfly, Michelle Dragony savors the Coastal Trail. She and her intrepid cruiser, Flame, can be spotted flitting up and down the coast daily. Watch the video as they invite you to explore their favorite sights, from Pillar Point to Half Moon Bay.

There are so many breathtaking vistas along our coast.  Lately with all of the whales swimming near shore, the views are even more majestic. You can read more about whales spotted along our coast here.

What is your favorite view?

Cruise the Coastal Trail this summer. Start in the harbor or in Half Moon Bay…

Then, RENT BIKES at Bike Works in HMB on Kelly Ave, right off HWY 1.
Six miles of heaven. Use your bell, be gentle to the pedestrians.
Then, PADDLE Half Moon Bay Kayak in the harbor.
Then EAT AND DRINK at fresh fish at The Old Princeton Landing,

And great BEER at The Half Moon Bay Brewery .

Video shot by Dom Padua’s District 650 with Tom Gilmore assisting (he’s the one driving, while Dom is out the sunroof!). Video edited in Final Cut and music created in Garage Band by Dom Padua.  See also to Dom’s earlier “Hand Plane” video.  Dom, was 16 when he made the video and was playing football and surfs for HMBHS and loves Engineering camp. Buzz search “Dom” for more of his videos.