This winter, Puente is launching a gift card drive to benefit farmworkers, seniors and low-income families and individuals in Pescadero, La Honda, Loma Mar and San Gregorio as they shop for essentials. Each $50 or $100 donation will assist one of 220 families, farmworkers and individuals this season. To donate, click here or mail a check to P.O. Box 554, Pescadero, CA 94060. 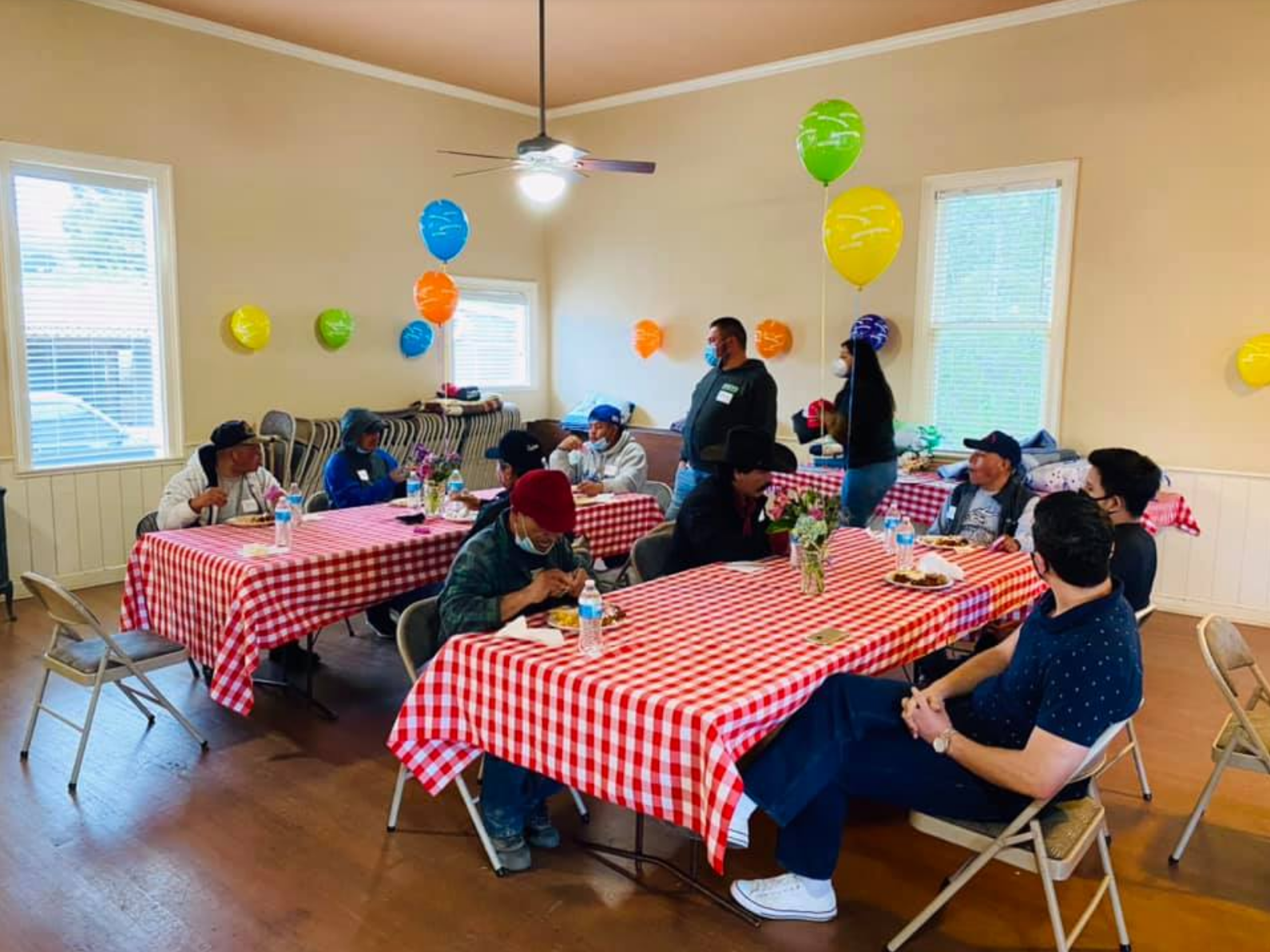 La Sala is back, and it’s a party!

After a year of enforced social distance and canceled programming, a reimagined La Sala reopened in May 2021 with balloons, music and a whole new vibe. The local workers who attended that first community dinner were treated to a raffle, gift cards, games and homemade food from Yesenia Ramirez, whose cuisine had been missed for months. It was all a little overwhelming and a little emotional. It also couldn’t have come soon enough.

Puente’s oldest program, a beloved social event geared toward agricultural workers who live hardworking lives without their families on local farms and ranches, was among the first to be canceled in the lockdown phase of the COVID-19 pandemic. The weekly get-together in the back room of the Pescadero Community Church has long been the only place for South Coast workers – who live far apart – to reliably commune over a meal together.

And losing that source of morale-boosting friendship – compounded by all the fear and uncertainty of that time – made life tough for local workers in 2020.

“Not having somewhere to go on a weekly basis, we were pretty much stuck going from home to work and then back to the house for a year. I would go out to cash my check or to buy groceries. That was it. And it was different not having a place where we could socialize with other people,” recalls Ruben Macias (whose name has been changed), a farm worker who works near Pigeon Point Lighthouse.

Macias, known as ‘Don Ruben’ to all his friends, is practically a La Sala lifer. The 66-year-old has lived in the Pescadero area for years. His gentle, easygoing manner and kindly paternal instincts have made him a popular source of local wisdom and a go-to person when a newcomer from Mexico, Guatemala or elsewhere arrives and needs the lay of the land.

“I try to invite anyone that’s new to the area to La Sala. I try to tell them that every new person will receive a welcome bag with the essentials, and even if they’re not open to it, I try to be welcoming and to tell them about Puente services, like Medi-Cal enrollment and things like that,” says Don Ruben.

Historically, La Sala has provided a welcome kit – including toiletries and essentials, as well as sometimes a bicycle – to the men who arrive on the South Coast to work. It’s also a way to connect them to Puente’s multitude of services. When the Rev. Wendy Taylor founded Puente in 1998, La Sala was her way of reaching out to what she called the “Men Alone” – a group of isolated Spanish speakers living rough in far-flung trailers and barracks, working in the fields and nurseries, and lacking any community to speak of.

From the start, La Sala has been an evolving project from, by and for its participants. Gabriel Echeverria was the first local nursery worker whom Rev. Taylor befriended. He became Puente’s first sitting board member and he set the tone for La Sala early on. He helped build the bike program and he distributed food and clothing to workers who were hard to locate. He was also known to play the guitar and sing with his friends.

Over the years, La Sala has been a constant. Although the faces change, the elements of food, music, community and material support are dependable. But for men like Don Ruben, La Sala has come to mean even more than that. His friends at La Sala were there to support him after he had a car accident several years ago, as he recuperated. And when Puente staff heard that Don Ruben had been slapped with a $66,000 hospital bill he couldn’t pay, they enrolled him in several programs that took care of the bill – and they coordinated his future medical appointments.

What was even harder for him – and other La Sala participants – was recovering from the sudden loss of their friend, Don Lupe, back in 2018. Don Lupe (whose full name was J. Guadalupe Hernandez Camacho) was a La Sala regular and a fixture in the community. He loved taking English classes at Puente, and he was known to play one of the three kings during the community holiday Posada. He would sing at La Sala when singers were needed. And he was Don Ruben’s close friend – the two of them had known each other for more than a decade before they came to Pescadero.

The Puente and La Sala communities rallied an effort to send Don Lupe’s body back to Michoacán. It was a complicated, expensive and emotional undertaking.

“It hit me hard when Don Lupe passed away, and it was difficult for a lot of us because we had a good relationship with him,” Don Ruben recalls. “We also had support from Puente counselors. I think that the counselors talking to us at La Sala helped us get through that difficult time.”

When La Sala reopened its doors this May, it was with new staff coordinators, new safety protocols and a new, lively format.

The vision came into focus quickly. “I knew I wanted La Sala to be the place where everybody feels welcome. Just to make them feel that this is our family, this is our home – and we’re all here to support each other and to listen to each other,” says Puente staff. “But we also wanted them to have a place for education, health education and workshops. And, to incorporate art or incorporate something else that will catch their attention.”

Flores helps run La Sala every week. Incorporated in the program are new activities like ongoing raffle (prizes have included gift cards, warm clothes, first aid kits, backpack, plastic Tupperware and bicycles), karaoke – and even dancing. Flores regularly tries to get participants into a dancing mood. “I sing with them and I sing horribly, but I mean, we have fun so I encourage them to sing along,” laughs Flores. “And I always ask, do you guys want to dance? And they’re like, no, we don’t know how to dance. Well me neither, you know, but we can learn!”

Staff describe Flores as “the light of the program. She does bring in this joy and cheer, but it’s more than just that. She just brings a smile to everybody in there.”

When it’s raffle time, that’s a game everyone plays. Flores tells participants to close their eyes, pick a ticket, and read it out loud. Raffle prizes are gift wrapped, and winners get to model it in front of everyone to general laughter. 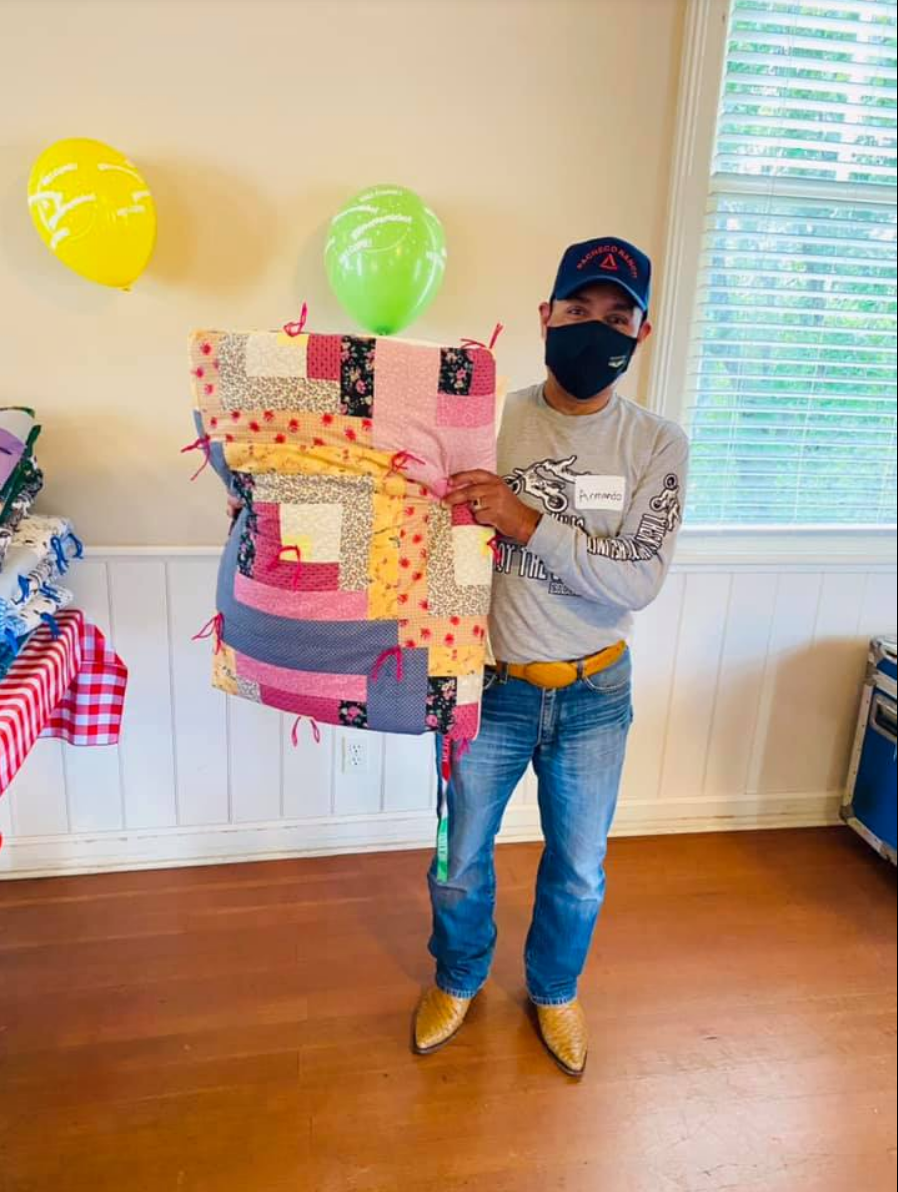 A La Sala participant shows off his raffle prize — a beautiful handmade quilt!

Birthdays are extra-festive, with a special birthday cake for the celebrant. Holidays like the Fourth of July and Cinco De Mayo always merit creative holiday décor, courtesy of the Puente staff.

Meals have been reconsidered with the pandemic in mind – participants are now served buffet-style so there’s no potential for virus transfer. And everyone who attends La Sala is fully vaccinated.

“We do the dishes, and then towards the end of La Sala, we just take time to go to each participant and see if they want to play, if they want to talk about anything, just to make them feel safe and seen,” says a staff member.

A balm against loneliness

The new format has been a success. As word spread, more and more participants wanted to check out La Sala. On some weeks, attendance tops out at 25, including some women for the first time.

That may not sound like a lot, but it makes a huge difference on the South Coast. Loneliness and social isolation are associated with greatly increased risk of heart attack or stroke, according to a widely-cited study in the medical journal Heart. That’s an equivalent risk to light smoking or obesity. Other studies have linked loneliness with weakened immune systems, heightened risk of dementia, depression, anxiety and high blood pressure. We don’t just crave social experiences with each other, we need them to survive.

Men sing together at La Sala in the early years of the program.

The stakes for the single workers become even starker when you consider that immigration policies have made it impossible for many of them to see their families for years, or to know when they will ever see them again. Don Lupe, the La Sala regular who died in 2018, used to travel back and forth to his hometown in Mexico, but it had been eight years since he had seen his wife, son and three daughters due to his legal status.

“To have the space where they can have a nice, warm meal, get to interact with other people from the community, other farm workers, and get away from the everyday routine – that’s important. They come here tired at the end of the day, and I do notice it,” observes a Puente staff member.

Puente has lined up several interesting guest speakers in recent months. For instance, on the medical side, participants have learned about taking care of diabetes, and gotten their blood pressure tested on a portable machine while they learned about the warning signs of both conditions.

Don Ruben is enjoying La Sala these days, especially the dynamism and the variety. “They’ve changed a few things. There’s raffles, they’ll play some music, there’s singing happening. We’ll play dominoes or card games. You could say it feels like a party,” he says.

This winter, Puente is launching a gift card drive to benefit farmworkers, seniors and low-income families and individuals in Pescadero, La Honda, Loma Mar and San Gregorio as they shop for essentials. Each $50 or $100 donation will assist one of 220 families, farmworkers and individuals this season. To donate, click here or mail a check to P.O. Box 554, Pescadero, CA 94060.