We are thrilled to share that on Monday, a U.S. Magistrate Judge in Seattle’s federal court issued a groundbreaking ruling finding the National Oceanic and Atmospheric Administration (NOAA) is violating the Endangered Species Act (ESA) by relying on undeveloped and uncertain future mitigation to authorize ongoing commercial salmon harvest in Southeast Alaska at levels  NOAA admits is pushing federally-protected Southern Resident orcas and wild Chinook closer to extinction.

The analysis acknowledges: “Under the existing management and recovery regimes over the last decade, salmon availability has not been sufficient to support [Southern Resident killer whale] population growth” and that because the current harvest plan is inadequate “more would be required to mitigate the effects of harvest and other limiting factors that contributed to the reduced status of Puget Sound Chinook salmon and SRKWs.”

In our lawsuit, we challenge NOAA’s decision to approve the fishery harvest plan under the ESA despite this harm by relying on speculative and unproven mitigation measures in the form of new hatchery production, which will itself impede recovery of wild Chinook salmon populations.

In the lengthy report filed this week, a U.S. Magistrate Judge overwhelmingly agreed with Wild Fish Conservancy’s claims, while denying motions from the State of Alaska and the Alaska Troller’s Association to dismiss parts of the case. Among the findings, the report found that NOAA violated section 7 of the ESA by improperly relying on uncertain mitigation measures that “lack specific and binding plans, lack specific deadlines or otherwise-enforceable obligations, and are not subject to agency control or otherwise reasonably certain to occur.”

The Court’s ruling is already being celebrated widely by orca and wild salmon advocates in coastal communities throughout the Pacific Northwest. If the recommendations are adopted by the District Judge who will now make a final decision in the case, the Southern Resident killer whales could finally see a meaningful increase of available prey migrating through their foraging areas, and coastal communities in British Columbia, Washington, and Oregon will celebrate far more wild Chinook returning to their home rivers to rebuild dwindling populations and maximize the benefits of local restoration efforts. 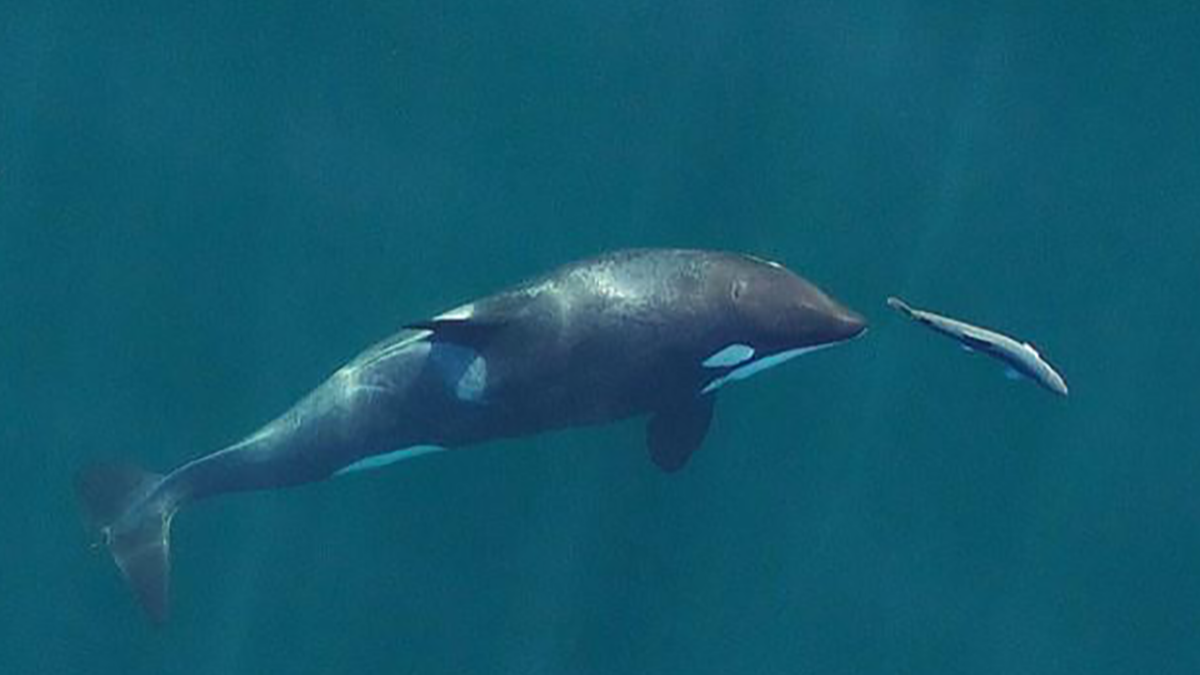 With this month’s devastating news that a member of the L-pod is missing and suspected dead, only 73 whales remain in the population, down alarmingly from nearly 100 only 25-years ago. Reduced prey availability, specifically large Chinook, has been identified by killer whale experts and NOAA’s analysis as the primary cause of their decline.

In the Southeast Alaska Chinook troll fishery at issue in this case, many people are surprised to learn that only 3% of all Chinook harvested originate from Alaskan rivers. The remaining 97% originate from rivers throughout British Columbia, Washington, and Oregon. If given the opportunity, these Chinook would migrate back down the coast serving as the primary prey for the Southern Resident killer whales as the Chinook pass through the whale’s key forage areas. Instead, under the current harvest plan, these Chinook are being harvested outside of the range of the whales, regardless of their status under the ESA, and at levels that federal fishery managers acknowledge are unsustainable for the long-term survival and reproductive success of both wild Chinook and the Southern Resident population.

As confusing as it may be to consumers, due in large part to NOAA’s approval of the fishery, all Chinook harvested in the Southeast Alaska troll fishery are certified by the Marine Stewardship Council (MSC) as ‘sustainable’ and will go on to be sold and marketed in grocery stores and restaurants throughout the world as ‘sustainable, wild-caught Alaskan Chinook’. In the early 2000’s when WFC’s scientists formally challenged the sustainable certification for this fishery, representatives for MSC did not disagree with our scientific assessment demonstrating the fishery’s problems, but timidly admitted pressure from the State of Alaska and financial considerations were largely responsible for the certification that still exists today— not best available science. As a result, well-intentioned consumers going out of their way to invest in sustainable products and avoid those which cause the most harm have been and continue to be knowingly misled and misinformed by the certifier.

Harvested far from home, these fish will never to return to their home rivers where First Nations, Tribal Nations, and other coastal communities are investing millions to restore wild fish habitat, remove dams, or reform local fisheries by transitioning to sustainable harvest methods like fish traps, reef nets, fish wheels, and seines. 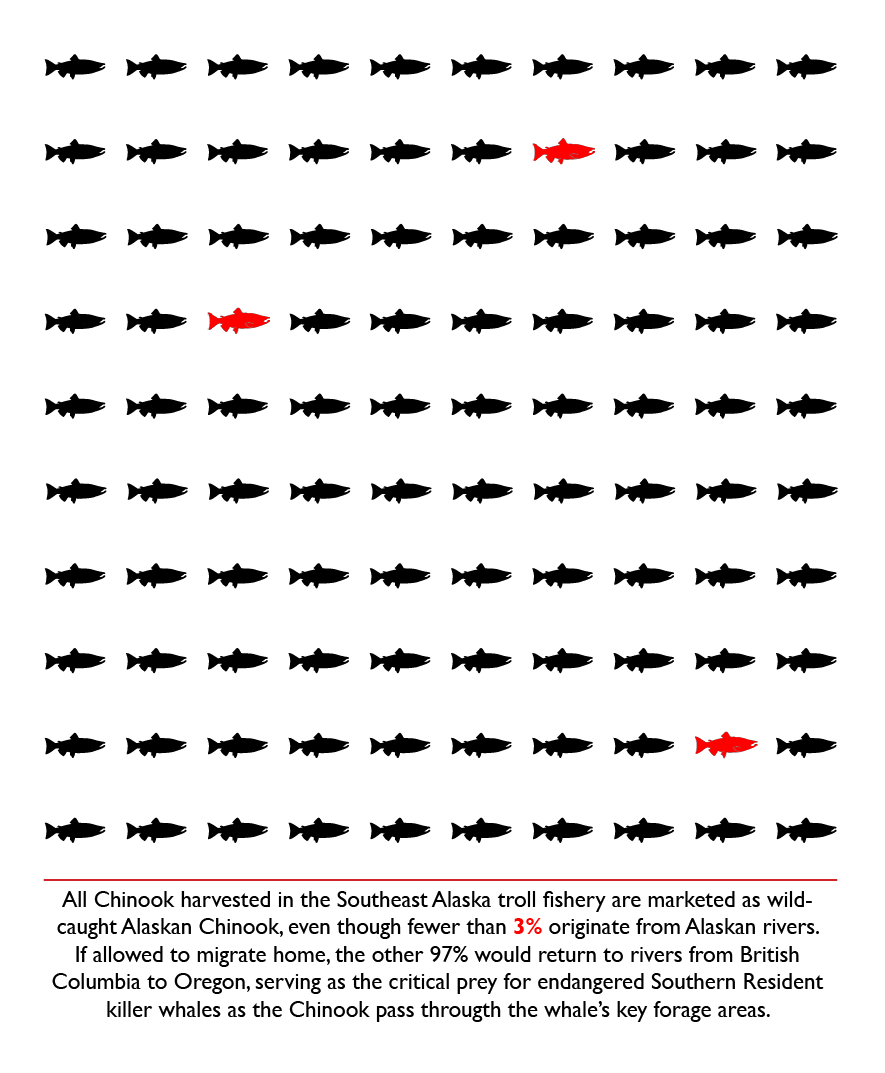 In a press release this week, Wild Fish Conservancy’s Director Kurt Beardslee emphasized, “Alaskan fishers who follow the rules are not to blame here, the fault lies with fisheries managers and NOAA for consistently approving unsustainable harvest plans. The Court’s findings are finally holding NOAA accountable for following the law and adhering to best available science, a win-win for wild salmon, orcas, and coastal communities alike.”

Our deepest thanks to our fantastic and dedicated attorneys, staff, friends, colleagues, donors, and supporters who have made this landmark litigation possible. We will be sure to keep you updated as this precedent-setting case moves forward.

Fisheries do not jeopardize continued existence of Southern Resident orcas.

Following nearly 40,000 public comments, NOAA Fisheries is approving an amendment to the fishery management plan for Chinook salmon off the West Coast. It will make more fish available for endangered Southern Resident killer whales in years when salmon returns are low.

Endangered killer whales depend largely on Chinook salmon as prey. NOAA Fisheries West Coast Region recently completed a biological opinion that examined the fishery management plan. It concluded that with the new amendment, the West Coast salmon fisheries will not jeopardize the continued existence of killer whale populations.

While many of the public comments submitted were form letters, most supported the action. It would limit Chinook salmon fishing in certain areas on the West Coast when the number of Chinook salmon along the northern Oregon and Washington coast falls below an estimated 966,000 fish. The Pacific Fishery Management Council recommended the amendment based on the conclusions of a workgroup that included state, tribal, and federal representatives.

The threshold was based on the average forecast of the seven lowest years of estimated Chinook salmon abundance off the northern Oregon and Washington coasts. Chinook salmon numbers in recent years have remained above the threshold, and last reached those low levels more than a decade ago.