A man, Nemanja Spasojevic, was snorkeling off the coast from Gray Whale Cove State Beach, about 18 miles south of San Francisco on the San Mateo County coast, on June 26, 2021, when he encountered a great white shark. 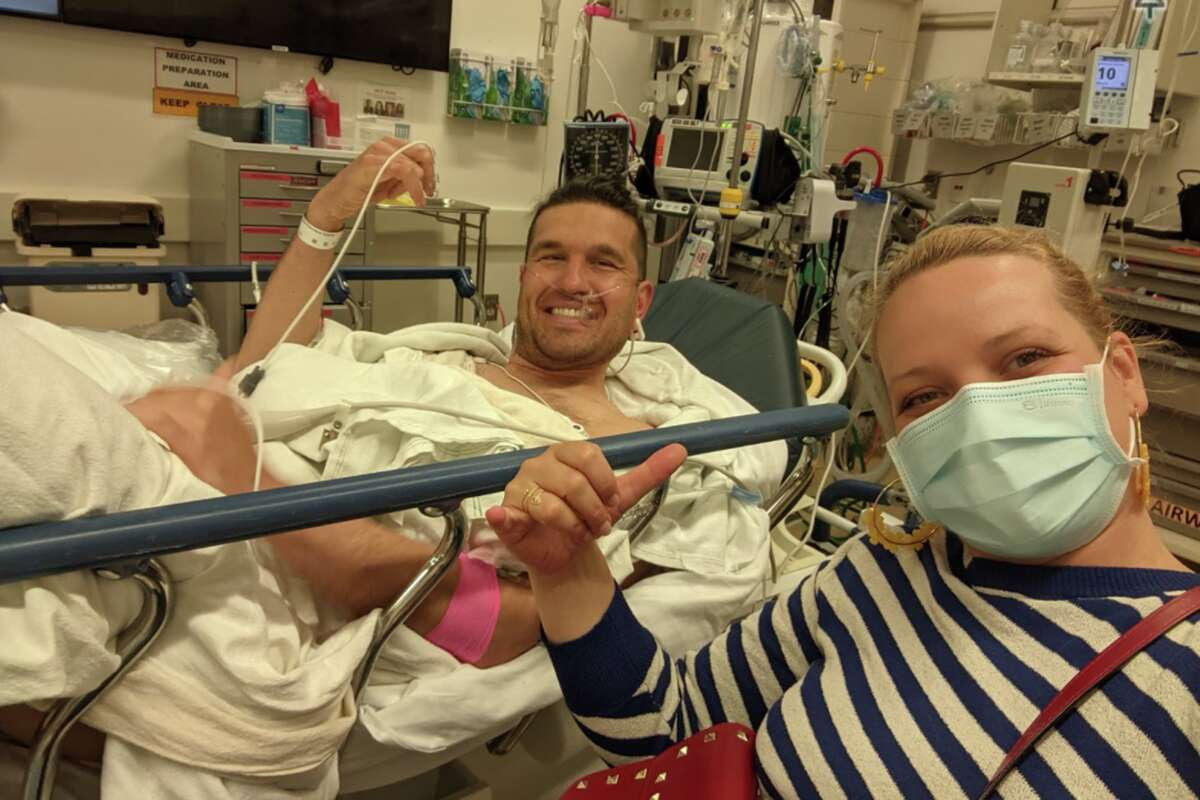 Nemanja Spasojevic was taken to Zuckerberg San Francisco General Hospital after being bitten by a shark at a beach on the San Mateo Coast on Saturday, June 26, 2021.

A San Francisco man whose leg was caught in the jaws of a great white shark Saturday in waters just south of the city described the initial pain to his leg like a “mosquito bite.”

Nemanja Spasojevic, 38, wrote in an account he shared with SFGATE that the bite felt gentle and shallow — “more like curiosity bite [than] attack.”

While the initial pain was minimal, Spasojevic said he quickly realized he had a serious wound after he swam back to shore and his wet suit filled with blood, gushing from gashes in his leg made by the shark’s serrated teeth. 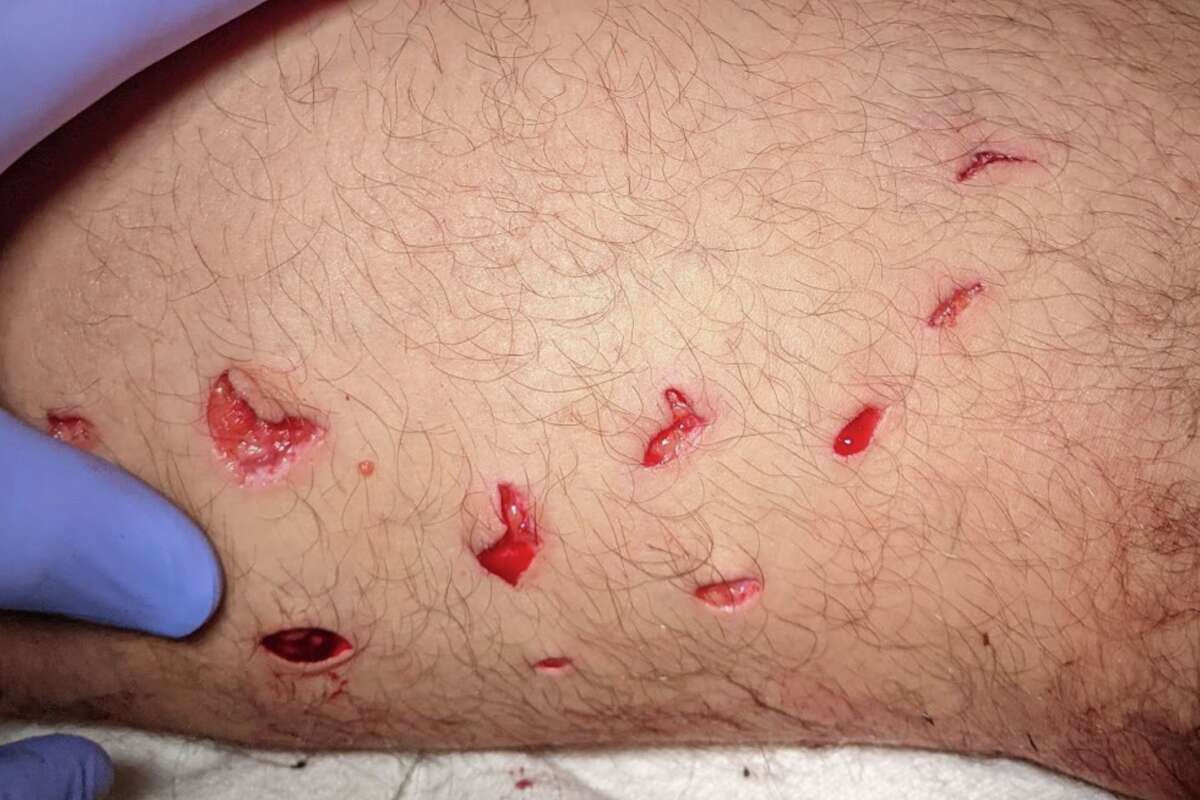 Nemanja Spasojevic described the bite by the shark at Gray Whale Cove State Beach as a “curiosity bite.”

This is an unusual spot for snorkeling, Spasojevic explained, as visibility is usually low, but on Saturday the surf was small and conditions favorable.

“A couple times a year conditions get good enough (3-9 feet visability) that it’s a fun, quick dive that yields a couple crabs,” he wrote in his account. “Actual conditions were around 2-foot swell with visibility that ranged from 4-6 feet roughly.”

Spasojevic said he entered the water on the north end of the beach at 8:35 a.m. and spent almost a half-hour free-diving for crabs, putting a few in his yellow dive bag.

He swam straight out from the beach on a route following a rocky point with steep cliffs that juts out from the north end of the beach. Just when he was about to turn around and swim back to the beach, he came upon an area with about five crabs below him and dove down to grab one. He assessed its size and decided while it was at the legal limit, he’d rather leave it behind and try again for a larger one.

After he put the crab back and began to surface to get some air, he said he felt the pain in his leg and then saw the face of the shark. While he couldn’t see the white underbelly, he looked right into its nose and black eyes. He was able to determine that the shark bit him at 9 a.m. based on footage from his GoPro (the attack wasn’t captured).

“At that point I just started kicking with my back turned towards rocks frantically,” Spasojevic wrote. “Hoping if it strikes again it will hit the fins. I reached white water area where water was bashing on the rocks.” 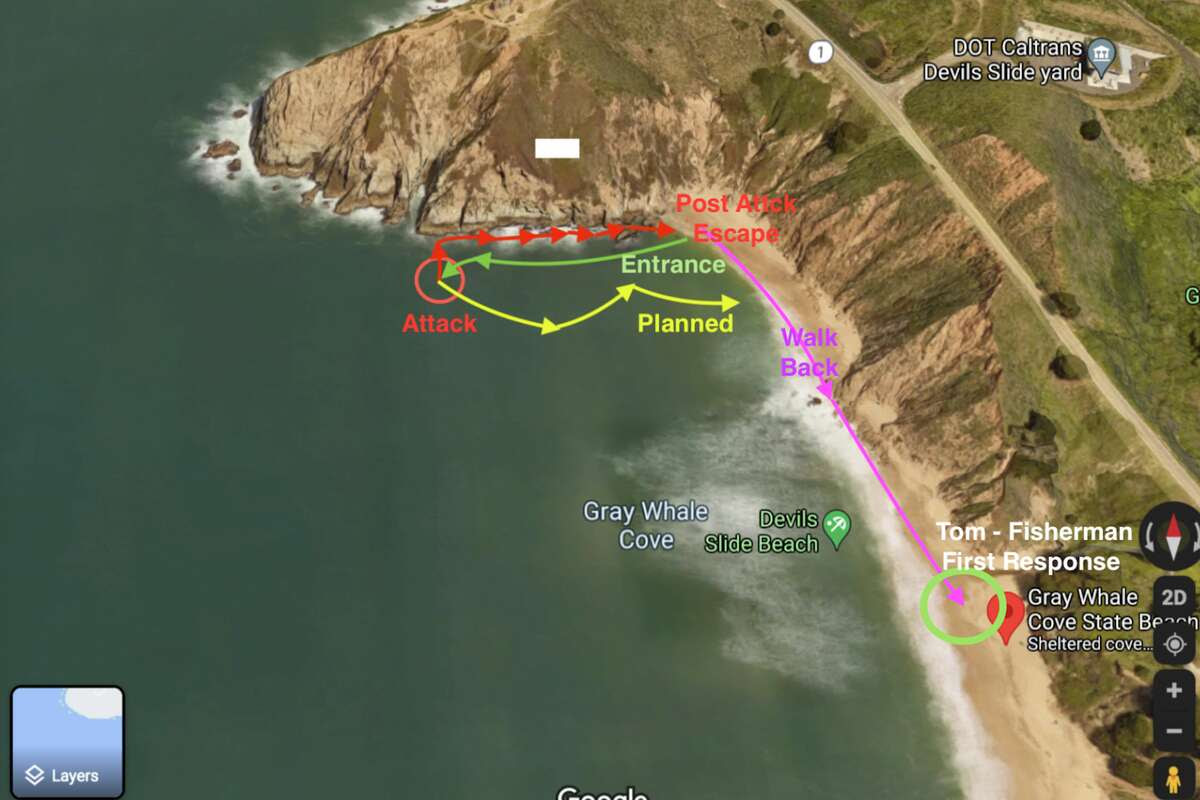 The swim back to shore wasn’t a problem, he said, because the surf was small and he felt no pain and had no awareness of the severity.

“I did think it’s minor, but I could feel that the wet suit was ripped and cold water was coming in,” he wrote. “… At this point I was out and walking on the sand, the leg of the wet suit was bulged/filled with blood. … I was aware that it may not be just a small bite, and I might need to drive to the emergency.”

Spasojevic said he spends a lot of time in the water and is in excellent shape and he thinks this helped him survive the incident. He’s a surfer, marathon swimmer, diver and a member of San Francisco’s South End Rowing Club.

On shore, Spasojevic took his rubber dive belt and wrapped it around his leg with the bite and created an improvised version of a tourniquet. His wet suit filling back up with blood, he walked from the north side of the beach to the stairs to exit the beach. Spotting a man on the beach, he yelled for help, and the fisherman provided assistance, calling 911, using his belt from his fishing fanny pack to reinforce the tourniquet and elevating the leg with a tackle box.

“When he noticed me I just dropped on the sand to position my body head downwards, as the beach was sloped, to help keep blood in the brain and slow blood loss,” he wrote. “Rubber dive belt tourniquet may have helped but did not stop flow.”

A helicopter was called to land on the beach and transport Spasojevic to the hospital but was canceled because of foggy conditions on the coast. Paramedics and state park employees carried Spasojevic, who said he weighs 220 pounds, up the stairs and into a transport vehicle. He was taken to Stanford Trauma Center and later Zuckerberg San Francisco General Hospital, where he was quickly stabilized. 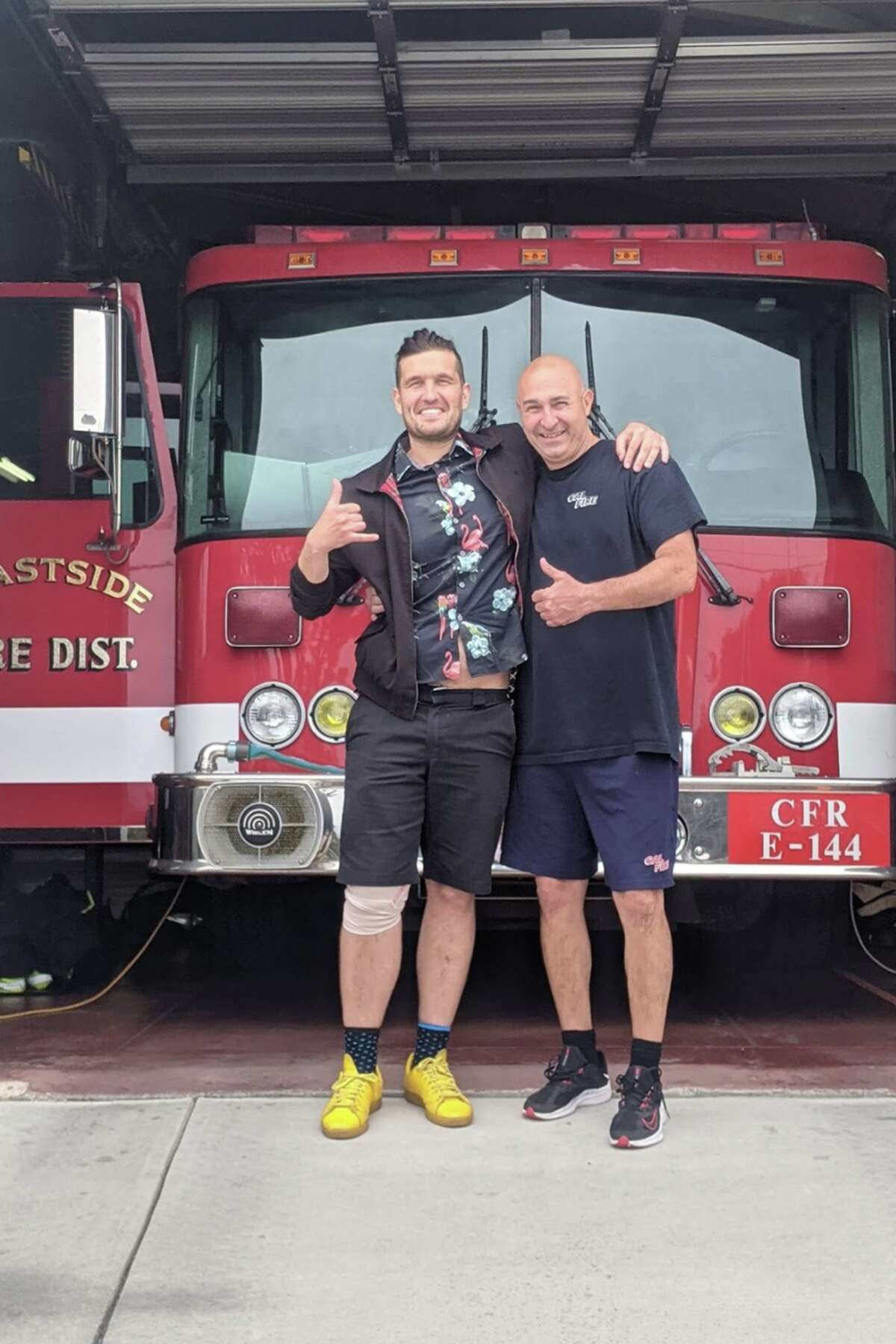 Nemanja Spasojevic, left, pictured a day after the shark encounter with Peter, who was the paramedic in charge from Montara Firestation 44.

Great white sharks are native to the Pacific Ocean and are often seen off the California coast, especially in the summer.

A recent study by researchers at Oregon State University found the population in Northern California is established and growing slightly. Scientists collected data from more than 2,500 hours of observation at three sites: Southeast Farallon Island, Año Nuevo Island and Tomales Point. They found “the population of white sharks numbers about 300, and evidence suggests that the adult population showed a modest uptick in numbers,” according to a statement.

While the sharks aren’t rare, attacks are. A man died after being bitten by a great white shark at Manresa State Beach in Santa Cruz County in May 2020. Before that, the last deadly shark attack in the region was in 2012.

Nearly 21 hours after the bite, Spasojevic was walking and discharged from the hospital with a treatment plan that included taking three different antibiotics and some painkillers.

He considers himself lucky. “My view of it was just a curious bite as gentle as it can get from such a powerful predator,” he wrote. “Their teeth are razor sharp and cut through the skin with ease. In addition to being thankful to all responders, I’m very grateful to the shark as well that it was gentle and did not strike again. … [After all,] ocean is their home and we are just visitors.”