The town of Princeton is known today for its harbor and fishing fleet, its proximity to Mavericks, and most recently an upswell of distillers, micro-breweries, and eateries. Yet the history of Princeton-by-the-Sea, as it was originally named, is both varied and intriguing.
If you’ve walked around the town you might wonder why the town is named Princeton—and why the streets are named after ivy league schools—Yale, Harvard, Cornell, Princeton? And more important, where is the beach resort?
The answer to the first question is that the town is reportedly named after San Francisco realtor and promoter Frank P. Brophy’s dog Princeton. The street names are likely a continuation of the Princeton theme, and they did add a cosmopolitan touch to the town. Even more interesting is that Brophy tried to make Princeton a premier resort, in fact “the most select beach resort on the Pacific Coast,” as reported in the July 6, 1912 edition of the San Francisco Call newspaper.
The land on which the town is located was part of the Rancho Corral de Tierra Mexican land grant to Francisco Guerrero-Palomares in 1839, who died leaving the land to his wife Josefa. She married James Denniston, who established a large and successful rancho named Denniston Ranch, and in 1859 built the first wharf on Half Moon Bay to ship his produce. The small village of Denniston, near Denniston Creek, that grew near the wharf had a school, built in 1873, and a voting precinct.
In 1908 when the Ocean Shore Railroad began arriving in nearby Granada, Frank Brophy sensed an opportunity and bought land west of Denniston Creek for his proposed Princeton-by-the-Sea village. In the same year he laid out the town and built the Princeton Hotel.
Brophy was an accomplished realtor and developer based in San Francisco who had extensive experience with beach property on the Atlantic Coast and in Southern California. Newspaper reports claimed that his experience gave him the “advantage of knowing the great future that was in store for the beach property.”
Brophy was also quite an entrepreneur and promoter. The July 22, 1910 issue of the Coastside Comet explained that “Mr. Brophy has laid out this townsite in a very ideal manner, putting in first class streets, cement sidewalks, curbs, shade trees, sewers and water mains and giving it the earmarks of what will soon be a very attractive and beautiful seaside suburban city.”
Brophy promoted Princeton-by-the-Sea as “destined to be the playground for a million people,” based on its proximity to San Francisco. The town was even touted as a sort of bedroom community where people would be able to live and go to and from Their offices in San Francisco within forty or forty-five minutes.
Newspaper articles and advertisements extolled the “fine fishing and hunting at all seasons of the year; also, fine bathing.” The shallow waters in Half Moon Bay were another draw. One pitch proclaimed that a “child 10 years old is perfectly safe in bathing here on account of the lack of undertow,” due to sheltering afforded by Pillar Point. For others, the promised health benefits of the mild climate and sea breezes were an attraction.
Most of all, Princeton-by-the-Sea was sold as an investment, with future potential to make money from early purchases of lots—much as others had done at Long Beach in Southern California. To increase the appeal of the lots, Brophy served as an agent for general architect and builder W. H. Jackson, who built several bungalows in the resort.
Brophy described the big plans and improvements that he was undertaking including Princeton Park, located near the hotel, a large dancing pavilion, tennis courts and athletic grounds, ornamental landscaping, a “water system second to none,” and a tent city for visitors. By 1912, the motor launch Princeton was available for fishing parties visiting the hotel.
The inducements apparently worked, as the Ocean Shore Railroad company announced in 1912 that it had sold by far more tickets to Princeton-by-the-Sea during the past year than to any of the other beaches on the Ocean Shore line. The Comet noted that Brophy “ran an excursion to Princeton last Sunday. He had 380 visitors and sold $15,000 worth of property.” Lots were advertised as low as $400, roughly $12,000 in today’s purchasing power. It was also reported that Brophy “expects to dispose of the few remaining lots at Princeton-By the-Sea before summer is out, and those wishing to get property there should speak at once.”
The future seemed bright for the fledgling resort but there was a dark cloud on the horizon—the demise of the Ocean Shore Railroad. 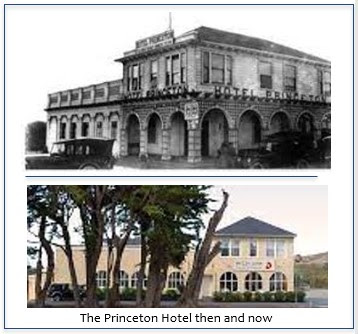 As the railroad that “reaches the beaches,” Ocean Shore had big plans for bath houses, hotels and restaurants, and amusement resorts. The dreams were largely unrealized and most of the structures have disappeared due to abandonment and neglect, fires, and extensive remodeling. Many of the lots were bought by investors who never developed them. What became of Brophy is not known other than a news story that describes him being shot at by a jealous wife who mistook him for her husband, and another about being injured in a car accident.
Visitors today will find few remnants and reminders of those early days. Modern day Princeton is a mix of a few residences and an eclectic assortment of commercial and industrial businesses.
So where is the beach resort of this article’s title? The answer is in the Ocean Shore Railroad’s story—it ceased operations in 1920, dooming those early efforts to turn the coast into a string of beach resort towns.
The Princeton Hotel is unique in that it is one of the few remaining structures of that era and is still easily recognizable from earlier photographs. Gaze at the Mezza Luna Restaurant and you are looking at one of the last vestiges of Frank Brophy’s vision.
Despite the setbacks, Princeton-by-the-Sea lived on and found new life in the Prohibition era. Stay tuned for the next chapter of the town’s story! It will appear in the Autumn issue of this publication.